Tijs excels in the Triathlon of Alpe d’Huez

You are here: Home / Blog / Tijs excels in the Triathlon of Alpe d’Huez
It’s a warm Thursday afternoon in August. My colleague Tijs Billemon, recruitment coach at Pauwels Consulting, is in front of me and -with all due respect- Tijs looks pretty tired. 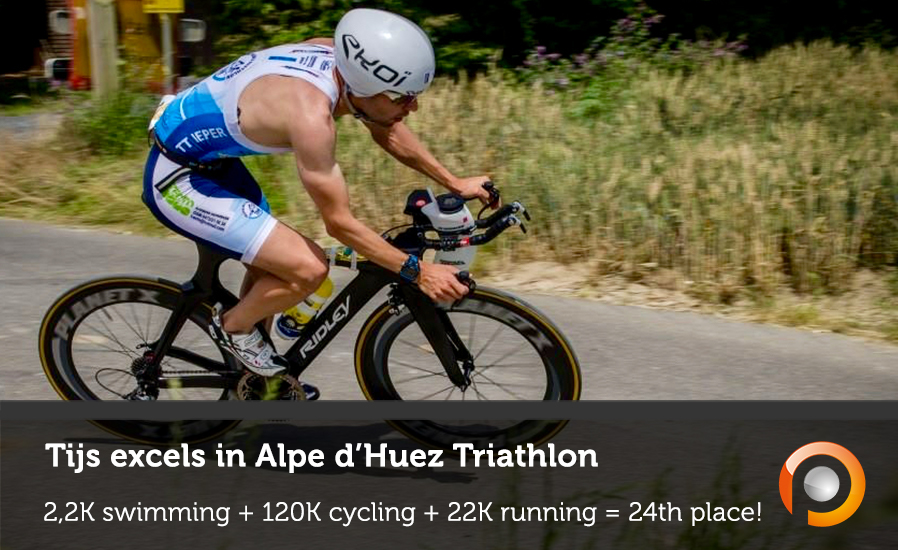 Tijs, what’s up with the tired look?

Tijs: I returned from holiday last night and I went back to work after only a few hours of sleep. It’s a hot and busy day so I feel a bit drowsy at the moment. (laughs)

Where did you travel?

Tijs: I just returned from Portugal. My girlfriend and I took a week off. I had to deliver on a promise I made to her when I was preparing for my ‘crazy challenge’ in France in July. (smiles)

Tijs: In July I participated in the Triathlon EDF – Alpe d’Huez in the French Alps.

Tijs: Yes, indeed. It was quite a physical challenge. First we had to swim 2,2 kilometres in the Lac du Verney. That was a refreshing experience because the water was freezing cold. The water of the Lac comes straight from the mountains. As a result, it is not much warmer than 15 degrees. Not your average pool temperature. (laughs)

When we got out of the water we had to do 120 kilometres on our race bike. The race involved 4 ‘cols’ with the legendary Alpe d’Huez as the icing on the cake. After that last 15K climb we had conquered more than 3000 altimeters.

At that point we still had to run 3 rounds of more than 7 kilometres on Alpe d’Huez. 22 kilometres in total, half of which on paved roads and the other half on mountain paths. 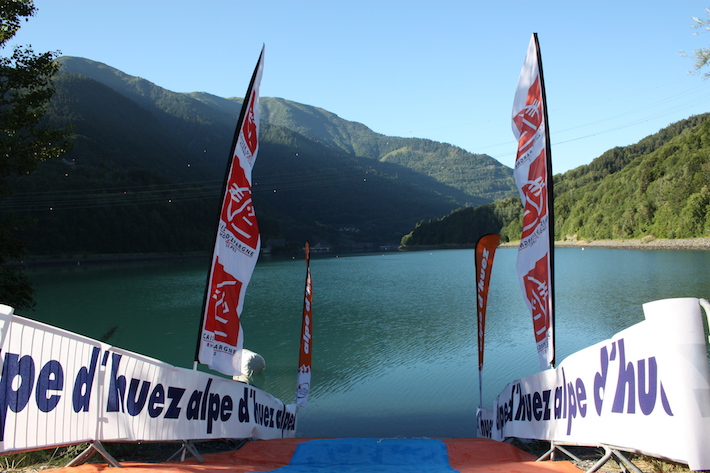 I love the relaxed atmosphere at triathlons.
Tell me Tijs, why do people compete in such crazy races?

Tijs: I can’t speak for everyone, but in my case, it all started 2 years ago when I participated in the Belgian Triathlon Championships in Eupen. I formed a team with my colleagues Niels Declerck en Dieter Uyttersprot and we took part in the trio-triathlon. Dieter swam 1,9 kilometres, I rode 90 kilometres and Niels ran 21 kilometres.

What do you love most about the triathlon?

Tijs: Triathlons always have a nice atmosphere. If you go to a race you always find people who are very dedicated and competitive but at the same time very friendly and supportive. Everyone just wants to have fun. I love that relaxed atmosphere.

Last year I decided to register for my first solo quarter triathlon. That felt so great I took part in a few more races in the following months. (laughs) I improved my personal records in every race and I came in second two times along the way.

Do you have a special talent for triathlons?

Tijs: I don’t know, but my body is used to long and heavy efforts by now. I was 15 when I started with competitive cycling. I did that until the age of 23. Then I started working and I cut back on my me-time. (laughs)

Two to three years ago I noticed that I missed the joy of high-intensity workouts, so I took up cycling again. Then I started competing in triathlons.

In the last four years I was also a teacher at the Wielerschool in Ronse. I combined that job with my job as recruitment coach at Pauwels Consulting. A few days a week I trained young upcoming cycling talents in Ronse, the other days I coached our recruitment consultants at our office in Ghent.

Because of my background in cycling, the cycling part is still my favourite part of the triathlon. That’s where I can make a difference, especially in heavy races with lots of altimeters such as the Triathlon of Alpe d’Huez. 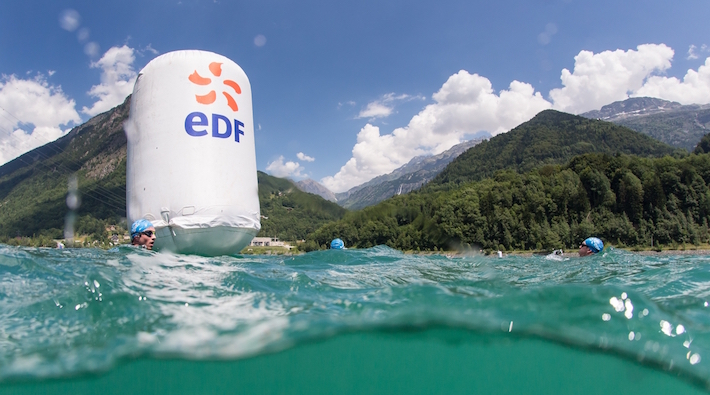 I had such a lousy swimming technique I felt embarrassed.
What about the running and swimming part?

Tijs: I started running a few years ago. I feel confident to run long races but unfortunately I have suffered from many injuries on my knees, pelvis and ankles already. My body just doesn’t respond that well to long and intensive runs.

Swimming was a different story. I had to start from scratch. I had such a lousy technique I felt embarrassed. So I turned to YouTube for instructional movies and to a personal coach for effective training exercises. Now, 2 years later, the swimming part is still my worst part of the triathlon but I still improve every month.

Why did you participate in this particular race?

Tijs: There were a couple of reasons. First of all, I like the challenge of competing in triathlons. This time I wanted to push my limits a bit further. I wanted to test how far I could go physically. It’s great to raise the bar in every new race.

Previously I had never competed in a race that lasted more than 4 hours. This time I knew that the race would take at least 6 hours. I wanted to see what my body and mind were capable of in such extreme conditions.

And obviously the French alps form an excellent stage for such a great race. You don’t easily find such a beautiful mountain landscape. And the mountains allowed me to compensate for my swimming part. I can really make a difference on steep climbs.

Did you follow any special training or diet to prepare for the race?

Tijs: I have been quite active in the last few months. I did a lot of cycling and swimming in December, January and February. In March, I had a one-week training camp in Mallorca to concentrate on all three sports away from the madness of everyday live.

In April, May and June I participated in a few Belgian races to prepare myself for the Triathlon of Alpe d’Huez.

Are you happy with your performance during the race?

Tijs: Absolutely! I had never thought that I would come in 24th in my first attempt. There were 1100 contestants so that’s not a bad result. (laughs) Especially if you consider that there were quite a few professional athletes in the race. I loved competing with these guys.

My motivation was obviously stronger than my fatigue.
What was your most difficult moment during the race?

Tijs: The climb to Alpe d’Huez! After 3 climbs and more than 100 kilometres, such a steep and long climb is really killing. In addition, it was really hot on Alpe d’Huez with temperatures of 25 degrees and more. The heat literally stuck on my body so I had to prevent dehydration at all costs.

When I reached the transition zone on Alpe d’Huez I heard that only 25 contestants had passed before me. That’s when I decided to give it my all in the last 22 kilometres. I got a mental boost and I was sure that I would run a fast race without any major difficulties.

Tijs: Not a single time. I was well prepared. I had scanned the race in advance, I had a nutrition plan and I found the right pace immediately. I won many places on my bike and I performed better than I had ever dared to imagine before the race. My motivation was obviously stronger than my fatigue. (laughs) 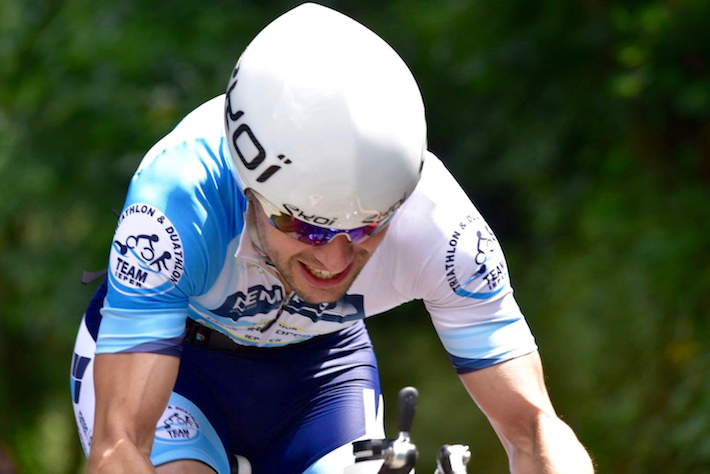 Did you prepare for the game alone?

Tijs: No, fortunately not. My dad and my brother-in-law accompanied me on this trip. Considering all things, it’s almost necessary to have support during such a game. We scanned the race in advance and we did some pretty intense training sessions.

During the race my brother-in-law assisted me with my bike and my dad made sure that our accommodation, food and drinks were taken care of. As a result, I could focus entirely on the race. That was awesome.

Did you suffer from any physical pains after the race?

I don’t think I have reached my limits yet.
I have a feeling that I know the answer to my next question, Tijs, but will you compete in more triathlons in the future?

Tijs: I’d really love to. That’s for sure. Looking back at the Triathlon of Alpe d’Huez, I now know for a fact that my body is capable of performing in such race.

I don’t think I have reached my limits yet, and if I’m really honest I think I can take on an Ironman (a full triathlon) next year. I’d really want to participate in the Ironman of France or Wales next year.

That’s quite ambitious Tijs! Why would you prefer these particular races?

Tijs: At the moment, I prefer to compete in full triathlons close to home. That way I don’t have to take into account any extra variables that result from traveling to different time zones, languages and weather conditions.

And let’s face it, triathlons close to home are less expensive than triathlons on the other side of the world. I have been told that the Ironman races in France and Wales are nice and intense. Especially the bike race. That’s an advantage for me.

Do you have any advice for people who consider participating in triathlons for the first time?

Tijs: Yes, I do. Please take it one step at a time. Give yourself enough time to learn and to enjoy the different sports without the element of competition. In Belgium there are lots of sprint triathlons for amateurs and short duathlons for sports enthusiasts who don’t love the swimming part. Almost anyone can participate in these races, as long as you are in shape and well prepared.

Which brings me to my second tip: please take your time to prepare for your races. Triathlons are demanding for your body. These races put a lot of pressure on your muscles, heart and cardiovascular system.

Give yourself enough time to train before or after your day job. There are people who run a Zermatt marathon without any training worth mentioning, but that’s only for the lucky few! (laughs)

I can imagine Tijs! Thank you again for this interview, congratulations on your achievement and all the best of luck with your future triathlons.