Recruiter, student and member of the national rugby team.

You are here: Home / Blog / Recruiter, student and member of the national rugby team.

Pauwels Consulting employs some tough colleagues, with ambitions both in the workplace and far beyond it.

Our colleague Sytske D’Haeseleir, for example, is combining a challenging career at Pauwels Consulting with a bachelor’s degree in clinical psychology and a rugby career in the national women’s team.

Despite her challenging job, her crazy training schedule and her studies, Sytske not only manages to keep on top of everything, she’s doing really well too. How does she manage? Read below in this interview. 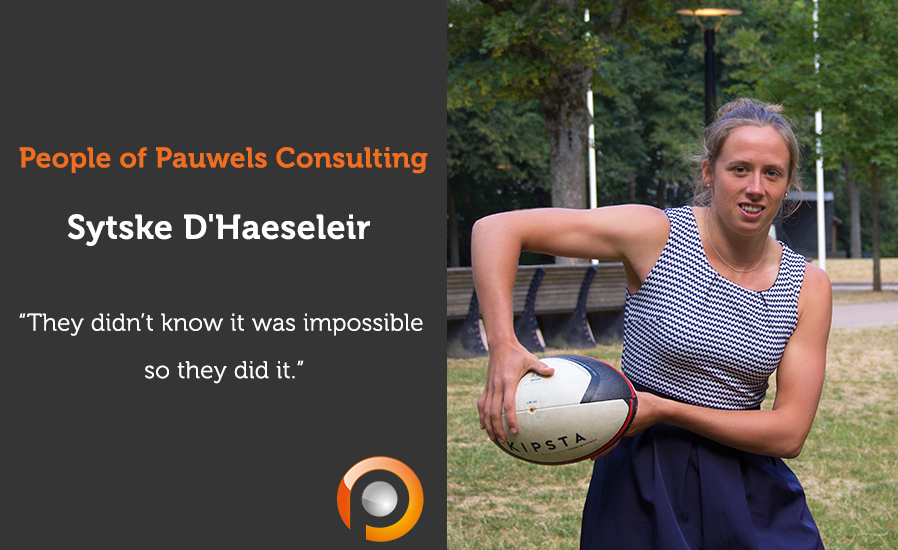 Sytske, can you tell us a little bit about yourself?

Sytske: I’m Sytske D’Haeseleir, ‘Chips’ to my friends. I’m from Serskamp, between Ghent and Aalst, where I grew up in a big family with four sisters and a brother in the midst of the youth association, judo and football.

Judo and football? Not obvious choices for a girl.

Sytske: Maybe not, but football is a big thing in my family and the judo training hall was just around the corner. Really practical and a great way to let off steam.

“My course tutor wasn’t at all optimistic, but I proved him wrong.”
What studies did you complete?

Sytske: Well, I took a very unusual path. (Laughter.) In secondary school, I specialised in modern languages, ​​then switched to art studies for the last two years.

Then I studied physical education for two years, but I didn’t finish the final year. I couldn’t see myself teaching straight away. Maybe later, but not yet.

After my studies in physical education, I decided to enrol for a master’s degree in psychology and business psychology at the Ghent University. For the most part, I completed this course from a distance in France. My course tutor in Ghent wasn’t at all optimistic, but I proved him wrong. (Laughter.)

How did you end up in France?

Sytske: Through another ‘hobby’ of mine: rugby. In 2010, I was seriously injured during judo, so I had to abandon it. A friend of mine suggested rugby as an alternative. I tried it out and ended up joining the rugby club of Dendermonde. 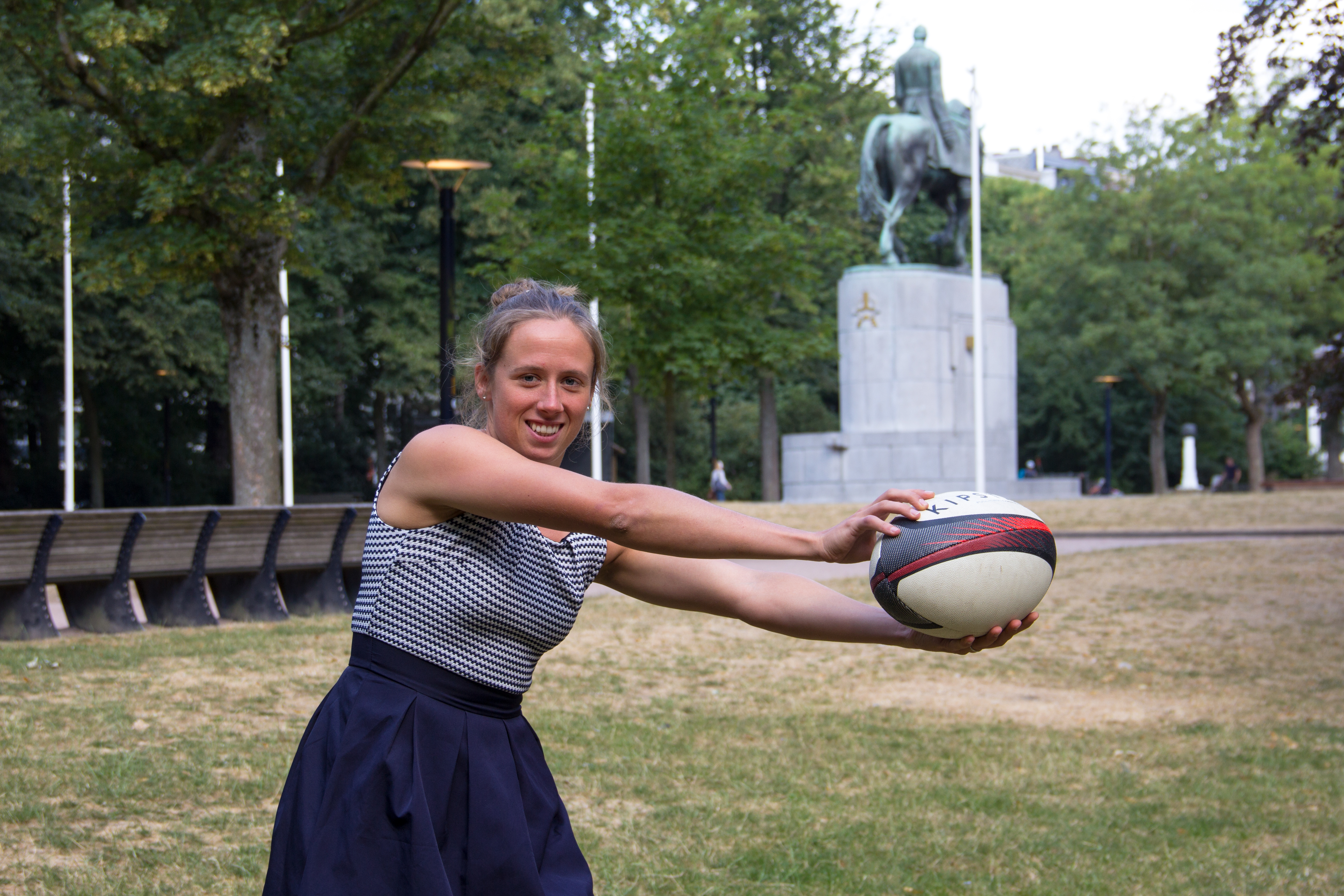 From judo to rugby. Not something you do every day…

Sytske: True, but rugby suited me. The team spirit, the intensity, etc. And I had my kick technique from football and my fighting spirit from judo to fall back on. Rugby is a great way to exploit all these skills.

When I was playing in Dendermonde, I was recruited by Ovalie Caenaise, one of the top women’s rugby teams in France. So that’s what led me to France. I ended up playing and living in Caen for two years. During that time, I also finished my business psychology course.

“The Olympic Games in Tokyo, that’s the goal!”
You now also play for the national women’s team?

Sytske: Yes. When I was in Dendermonde, I had an opportunity to go to Morocco for an internship together with a group of about twenty-five other ladies. At the time, they wanted to start a new Rugby Sevens team. In the end, I was selected for the national team. A fantastic experience.

Do you have to train and play a lot?

Sytske: Every week, I take part in two club training sessions, one club game, one training session with the national team, two fitness sessions and one running and skill training session. On top of all that, I do hypoxia training in a high-altitude cabin, a low-oxygen chamber. Pretty tough, as you can imagine.

But it’s all worth it! I do have to sacrifice a lot for my sport, but at the same time I get a lot back from it. I have already played with the national team in Dubai, Hong Kong and recently in Paris. In September, I’ll be taking part in the second round of the European Championships in Russia and hopefully in 2020 we can go to the Olympic Games in Tokyo, that’s the goal!

Is there a real chance that you’ll make it to the Olympic Games?

It’s a pity that we’re playing in a continent where there’s so much competition, but that makes it even more of a challenge and strengthens my ambition.

Sytske: After my studies I worked as a product manager at Decathlon. I helped with the development and commercialisation of the very first rugby line for women. That line for women is still sold to this day. If you look closely, you still might even find me on the promotional photos for the rugby line in the Decathlon stores. (Laughter.)

Various circumstances made me decide to move to Ghent in the summer of 2017. Then, in order to limit commuting, I looked for a challenging job closer to home. I ended up at Pauwels Consulting.

Why did you choose Pauwels Consulting?

Sytske: The culture of the company and the interviews with the recruiters immediately appealed to me. Here, everyone is open, wants to move forward and enjoys their job. That was decisive for me. I also found the personal aspect very important.

We’re in a competitive sector, but we approach it in a personal way. It’s all very well obtaining good results, but, as recruiters, we obviously also want to arrange our candidates their dream jobs. I like to guide people to a job they really want, especially if they’re not sure about what they’re looking for.

I understand that you’re now also following another course?

Where do you get the time to combine everything?

Sytske: Combining top-level sport, work and study is only possible if you’re flexible, communicative and good at planning. It’s essential to anticipate busy periods, discuss them and coordinate the various schedules.

During busy periods at work, I make sure I’ve finished my sports training by the afternoon or early in the morning, so that I can work longer in the evening. During the rugby season, I send my weekly schedule to my colleagues, so that they know when I’m available for questions.

My coach at the national rugby team is also well informed about my workload at Pauwels Consulting and my course schedule. In any case, long-haul flights to Hong Kong or Dubai are great for studying. A plane is the perfect place to study. After all, there’s nothing else to do high in the sky. (Laughter.)

Do you never feel that you have to make choices and leave some things out?

Sytske: JYes, but the satisfaction that my work, my sport, my studies and my private life give me makes up for it all. I’ve always had a lot of support at home. My partner is also very understanding. That’s necessary too. Otherwise, I wouldn’t be able to combine everything.

And do I have to leave some things out? Yes, especially food and drink. I’m careful with my diet and alcohol is a total no-go area at certain times. Sleeping well is also very important to me. But again, my friends and family show a lot of understanding, something for which I’m very grateful.

Finally, Sytske, where do you get the energy from to keep going like this?

Sytske: The feeling that there’s enough of a margin to progress, both at work and in my sport. Every day, I learn something new at work and we have a lot of competition in rugby. The Olympic Games in 2020 are a difficult but feasible goal. I intend to go for it full out.

Are you going to get an Olympic tattoo if you go to the Games?

Sytske: No, not a tattoo, but I think I’ll take a photo as a souvenir. (Laughter.)

Thanks for the great interview, Sytske, and good luck with all your professional, sporting and personal ambitions. Let’s wish you luck right now in getting an Olympic gold medal!

Stay up to date

Did you find this interview interesting? Thank you for sharing it with your network.

Would you like to read more interviews with our consultants? Click here to find our previous interviews. And if you press the red button below, you will subsequently receive all our future interviews in your inbox as soon as they appear on the website.