4 business lessons based on the Ironman in Bolton

You are here: Home / Blog / 4 business lessons based on the Ironman in Bolton

Earlier this year, we published an article on the ‘Billemon Brothers’, a.k.a. Tijs and Sam Billemon. Tijs is Recruitment Coach at Pauwels Consulting and, like his brother Sam, a bit a sports fanatic.

No mountain is high enough for them and it was only a matter of time before they would accept the challenge of their very first full triathlon. They did it, and how!

Tijs came in 32nd and Sam 120th of the 2,000 participants of the Ironman UK in Bolton. A spectacular achievement, even more so if one knew that only several weeks before the start Tijs broke his collarbone and was not permitted to swim and run for some time.

We discussed the Ironman with Tijs, as well as his ambitions, sports in general and specifically the similarities with the business world. An interesting discussion! 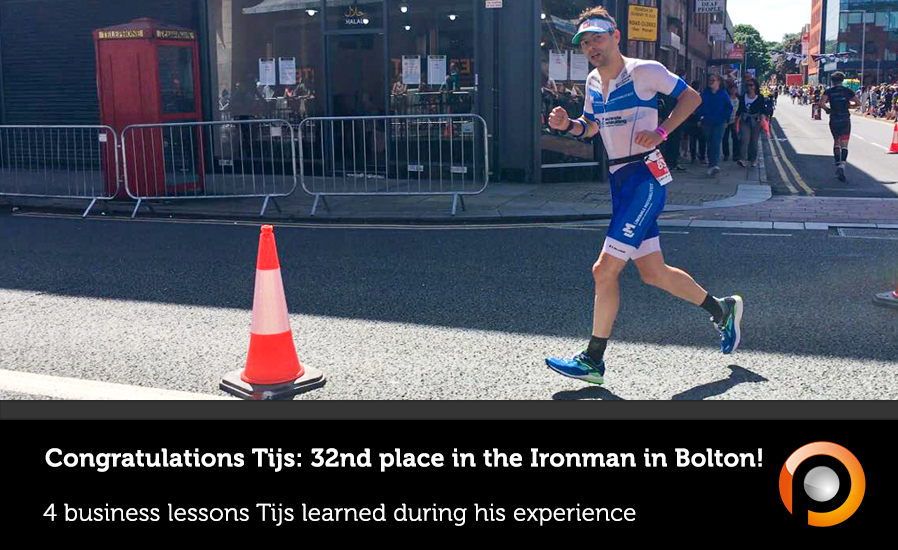 Tijs, first of all, our sincere congratulations on the excellent achievement!

Tijs: Thank you. It was a challenge, but we did accomplish it. Both of us. I reached the finish line ten hours and five seconds after the start signal. My brother took about 50 minutes longer than that. We were both overjoyed with our achievements, notwithstanding the fact that we really did take it to extremes, physically as well as mentally.

How did you experience the competition?

Tijs: Above all, I really admire my brother’s achievement. During the bicycle test, he was already confronted with stomach issues, which was why he could not digest food well. He was forced to lower his speed to be able to cross the finish line. For him, the marathon proved to be a mental challenge, but he persevered. An exceptional achievement for a guy of only 27 years old.

With regard to my own achievement, all went perfectly according to plan. During the swimming part, I proved I could compete with the majority of the group rather well. During cycling, I moved up several places. The fierce headwind during the starting phase caused large time differences.

At the time of the switch to running, I was certainly not burned out. The first half of the marathon went according to plan, but after 30 kilometres, my speed dropped. This is why I lost several minutes to be able to meet the qualifications for a slot for Kona.

A slot for Kona?

Tijs: In each age category, the high-level athletes are given the opportunity to qualify for the world championship on the mythical island Hawaii. Three qualification slots were open for my category. Unfortunately, the competition is very fierce. The winner in my age category achieved the fourth general position, far ahead of quite a number of professionals. I was ninth in my category and missed twelve minutes to qualify. I will continue to pursue my dream to participate in Hawaii in the future.

Twelve minutes, that appears to be insignificant in a competition of ten hours, isn’t it?

Tijs: Indeed, it is, and looking back, I know exactly where I lost those minutes. I intended to complete the swimming test within one hour, but this is where I actually lost seven minutes. This is mainly because, after my collarbone fracture, I was not allowed to swim for a period of two months. Only in the last weeks prior to the Ironman, I could work on once again achieving my swim routine.

My cycling performance was good. I cycled five hours and twenty minutes at an average speed of 35 km/h (for the true fans: with a normalised power of 230 watts). I easily managed the heights and realised a top 15 cycling time. More progression on this section is quite impossible.

Running did not work out as smoothly as expected. Due to my collarbone fracture, I can count the number of running training sessions exceeding twenty kilometres on just one hand. In the last ten kilometres of the running test, I lost quite some minutes. The switches and sanitary stops did not go as smoothly as planned either. Looking back, I know I lost too much time here as well.

However, what’s done is done. And I am not complaining. I am quite happy with my results. Now, I finally know what my body is capable of after seven hours of sports. Before, this was unknown territory.

Your preparation did not go as planned?

Tijs: Not really. During the duathlon of Douai, which was held on the 30th of April, I fell with my bike. I fell hard on my shoulder and fractured my collarbone. My first thought was: “Game over.”

The injury had quite an impact on my swimming and running training. Because of this, there was a loss of the condition I built up, but I never complained. I did learn from it though. As a matter of fact, these lessons serve me well during my daily work as well.

“Ensure a realistic planning, specifically after a setback!”
Tell us more, what lessons did you learn from the triathlon?

Tijs: Firstly: ensure a realistic planning, specifically after a setback! Only three days after my injury, I was once again cycling on rollers, against my doctor’s advice. The original ‘crack’ became a real fracture, including a minor displacement.

Therefore: if your body needs rest, allow it to rest. I realised that I pressured my body for no reason. During our working days, it is also essential to divide activities well. Busy schedules, fast-food meals, lack of sufficient sleep, stress, etc. In sports and during work, it is treacherous to continue purely on mental power. Your body is relentless, don’t forget. If your body halts, true issues surface. Our society is continuously adapting. Live healthy, sleep sufficiently, divide the work, include time for family, etc. It is all extremely important, isn’t it?

Secondly: be man enough to adjust your objectives. I remember a conversation when at the doctor: “Tijs, you can forget about the competition in Austria in six weeks. It will be impossible for the fracture to heal within that time. But the Ironman in Bolton, that could possibly be achieved. As long as you are sensible in building up your efforts to meet your goal….”

These words lingered in my mind. I started the training on a very low level and each week I adjusted my objectives. Each time a bit longer or a bit more intense. There were times that I went to the swimming pool just to tread water. Or I walked on the treadmill for half an hour just to keep my muscles active. After six weeks, I could finally run and swim at full capacity. With only five weeks to go, I believed it would all turn out well. These small steps forward did sharpen me mentally in an incredible manner.

So, if you experience a hard time during sports or at the job, make sure to encourage yourself (or let yourself be encouraged) all the time. This truly makes a world of difference.

“I trained myself mentally for tough times.”
These are two lessons already. What else did you learn? 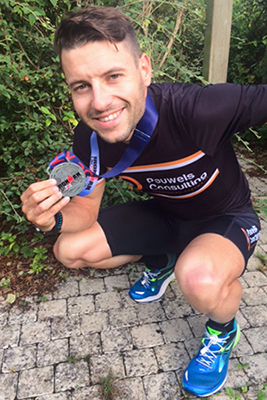 Tijs: You can actually prepare yourself for hard times. Prior to the competition, I trained myself mentally for tough times. As such, I simulated a competition in which I swam three kilometres, cycled 130 kilometres and ran half a marathon only three weeks prior to the Ironman.
At that time, I worked out very intensely to discover my pain threshold. I wanted to know exactly how my body would feel after such debilitating exertions.

So… if you set an ambitious goal for yourself, also set intermediate goals to prepare yourself. As such, the simulation will reassure you and confirm that you will achieve your goal.

And finally: do not underestimate the importance of your environment. A good team is important to succeed.

I had the opportunity to profit optimally from a fabulous team around me after my collarbone fracture. A doctor who gave me the correct advice, two physiotherapists who once again mobilised my shoulder and the moral support provided by my family and girlfriend.

My girlfriend was my best supporter and she made it possible for me to train more and catch up. Also, my training buddies and my trainer encouraged me, which made part of my mental tension disappear before and during the competition. Each and every one of them contributed significantly to my sporting achievements. I am very grateful to all of them.

You cannot achieve this entirely on your own. This also applies to work. You need to have a strong team around you, specifically for aspects in which you do not excel yourself. As such, you will be able to improve the level and achieve goals which could not have been mastered on your own.

Indeed, Tijs. Thank you very much for this interview and once again our sincere congratulations with your spectacular achievement!

Do you have any questions after having read this interview or would you like to accept a sportive challenge sometime in the future? Tijs would be pleased to help you: [email protected].com.