The Dodentocht was a rollercoaster of emotions

You are here: Home / Blog / The Dodentocht was a rollercoaster of emotions

People are capable of amazing things. Especially when they are challenged and motivated. Kris van Nieuwenhove is a great example in this respect. On August 12th and 13th, Kris walked the famous 100K Dodentocht in Bornem, Belgium.

We had the pleasure of speaking with Kris about the challenge which he now describes as a “rollercoaster of emotions”. 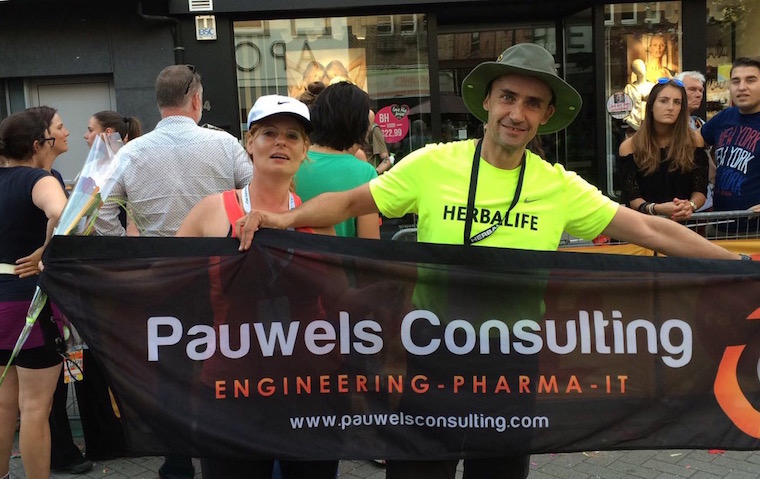 Kris, can you tell us a little bit about yourself?

Kris: Sure. My name is Kris Van Nieuwenhove, I’m 45 years old and I have been with Pauwels Consulting for 2 years now. I currently work as a project leader on 2 projects with GSK.

The first project concerns the introduction of sterile goggles. GSK has a supplier who can provide us with reusable sterile goggles and the company wants to use these glasses in a number of production units.

The second project concerns the introduction of reusable overshoes. At the moment we are still using single use overshoes and we are looking for a more sustainable solution.

Thank you Kris. Sounds very interesting! And so does your participation in the 47th edition of the Dodentocht! How did you experience the event?

Kris: The Dodentocht was a mix of emotions. Luckily most of them were positive. (laughs) Walking 100 kilometres is hard physically and mentally, especially because it was my first time. That made it difficult to plan the ‘race’. The time limit and the closing hours of the checkpoints along the way caused quite a bit of stress in the end.

How do you mean?

Kris: You get 24 hours to complete 100 kilometres and you are free to take breaks to eat, drink and being taken care of whenever you want. That being said, the checkpoints along the road, the points where people take care of your blisters, close at a certain hour.

In the end I suffered from several painful blisters. As a result, I needed more stops. It was a race against time to reach the 5 final checkpoints in time. At one particular checkpoint we only had 20 minutes left before the checkpoint would close.

But you made it to the finish in time, didn’t you?

Kris: Yes I did. We crossed the finish line an hour before closing time.

Did you participate all by yourself?

Kris: No, there were the four of us: my wife, my neighbour, a friend of mine and me. The formation of our group is a nice story in its own right.

Apparently my wife and I had considered participating in the Dodentocht at the same time earlier this year… but we didn’t know this from each other. When we found out about our common intentions, our neighbour and a friend from the fitclub wanted to join us as well.

Where did you find the motivation to walk the 100K Dodentocht?

Kris: The Dodentocht had been on my bucket list for a couple of years already. I was looking for a new challenge. Years ago I ran the Brussels 20K but in the years that followed I suffered from migraine headaches. This prevented me from participating in sports events.

At a certain point I changed my diet and way of life. As a result, in the past couple of years I’ve only suffered from 2 more migraine headaches. That’s why I wanted to participate in this edition of the Dodentocht.

Did everyone in your group complete the Dodentocht?

Kris: No, unfortunately not. Our neighbour had to stop after 60 kilometres, despite being in good shape. He suffered from joint pains so he took a very wise and brave decision!

My wife and the friend from the fitclub crossed the finish line with me, but my friend was hooked up to a monitor immediately after. He had suffered from his blisters… big time! In an attempt to alleviate the pain, he had adjusted his walk and he had put too much pressure on his knees and ankles. Luckily things weren’t as bad as they appeared at first sight and my friend could go home after an hour.

The physical challenge seems quite harsh indeed. Did you have any special training for the Dodentocht?

Kris: We followed the 3-months preparation scheme of the organisation. This prepares you for the Dodentocht in just 3 months. Normally you can also follow a 6-months schedule. With hindsight, that seems more realistic to me.

What was your nicest moment and why?

Kris: There were 2 moments that stood out. Obviously crossing the finish line felt great. It was extra special because I could cross the line with my wife.

We both have pretty busy professional and social agendas so we don’t have that much time left for each other during the week. If felt really good to complete the Dodentocht together.

And what about the other moment?

Kris: Before the race I had created a Facebook page. During the race, I posted regular updates and livestreams. This way people could see how we were doing in real time. First we shared our excitement, then our fatigue and then our pain. At a certain moment, when the pain of the blisters kicked in really hard, we started receiving lots of encouragements via Facebook and SMS. That really moved me.

And 25 kilometres before the finish line our daughter and son came running to us. They wanted to join us for a little while. At that time, I was suffering from my blisters really hard so I was pretty emotional. I decided to stop at the next checkpoint to have my blisters taken care off and I convinced myself to go on.

What was your most difficult moment?

Kris: The last 5 kilometres, without a doubt! Before the race I had decided not to wear my backpack, but I regretted that decision during the race because my camelbak was in my backpack.

I had a regular bottle with me but drinking was just not as easy as with my camelbak. As a result, I didn’t drink enough during the race, which made my last 5 kilometres really hard.

Kris: Never. Quitting was not an option. We had put so much time and effort in the preparation for this event… As a result, we have missed a significant amount of free time with our children.

We were sort of obliged to complete the Dodentocht. I had set my eyes on the prize. I had to earn that medal, one way or another. Besides, quitting is not in my dictionary. (laughs)

Did you speak with many other participants during the race?

Kris: Yes, I did. Our children and some of our friends and acquaintances joined us for a little while and sometimes we joined other participants to support them when things got rough for them.

Last question Kris: Will you do this again?

Kris: I will. For sure. Others will consider me a fool, but I will come back nonetheless. I have identified my “lessons learned” so I should be good. (laughs).

Plan your future, work to reach your goals and be flexible

If no one thinks you can, then you have to.
Scroll to top