5 lessons to remember from the Belgium-Japan World Cup game

You are here: Home / Blog / 5 lessons to remember from the Belgium-Japan World Cup game

5 lessons to remember from the Belgium-Japan World Cup game

On July 2, 2018, the Belgian Red Devils were facing Japan in the first game of the knockout stage at the FIFA World Cup in Russia. Before the game, the Belgian media and fans were convinced that it would be a walkover. Belgium would crush Japan.

We couldn’t have been more wrong.

At the beginning of the second half, the Belgian team took 2 goals in 4 minutes. This left Belgium with just 37 minutes to score at least 2 and preferably 3 goals to make it to the next round.

After bringing 2 substitute players on the pitch, Belgium managed to fight its way back into the game. Finally, in the dying seconds of the game, Belgium scored a wonderful goal and made it to the quarter-finals.

Many Belgian supporters died a thousand deaths during the game, but we made it in the end. There are some important (business) lessons to be learned from this game.

Before the game, the Belgian media and fans were confident that we would make it to the next round. So were we at Pauwels Consulting. We even put the following video on our Facebook and LinkedIn company pages.

Evidently, this small video clip was meant as a joke and as a means to fire up the Belgian fans on social media, but after the game we can only conclude that:

In other words: in business and in life, it’s important to stay humble at all times.

2. Learn from your mistakes

Yesterday, it was exactly 2 years ago that Wales, a humble football team with modest aspirations, beat Belgium in the knockout phase at the 2016 UEFA European Championship in France. Game over for Belgium.

No one had seen that coming.

And yet, 2 years later, after multiple warnings from football experts, the Belgian team almost got a remake of the tragedy with Wales. Needless to say, it’s very important:

Thibaut Courtois, the Belgian goalkeeper, was dead honest in an interview right after the game. He admitted he and a few other players on the pitch were in doubt when Belgium was 2 goals behind.

This resulted in a lack of focus, inaccurate passes and even more chances for Japan to score their third goal.

After the first Belgian goal though, all Belgian players started believing in a revival. The rest is history.

The takeaway lesson here: never give up when you can still change the outcome of the game.

4. Don’t forget the people behind the scenes

A few Belgian players had a hard time on the pitch yesterday. That’s OK. They’re only human after all. After bringing two substitute players into the game, the game changed.

Case in point: it was the 2 substitute players who made the second and the third Belgian goals. The lessons to be learned here:

Which leads me to lesson #5.

Romelu Lukaku is a striker of the love-him-or-hate-him kind. No matter how you feel about him, he had a major role in the decisive goal – because he didn’t touch the ball. On purpose!

Most strikers would have taken a shot at eternal glory, but Lukaku didn’t. Instead he looked at his team mates, he looked at the action, and he decided to play a supporting role.

By diverting the Japanese defenders, he gave his team mates time and opportunity to put together a glorious rush from one side of the pitch to the other, and by lifting his foot at exactly the right time he made sure that his team mate Nacer Chadli could score the final goal.

Lesson to be learned here:

Stay courteous. Even in your darkest hour! This is how the Japanese left their locker room after their defeat. They even left a thank you note in Russian: 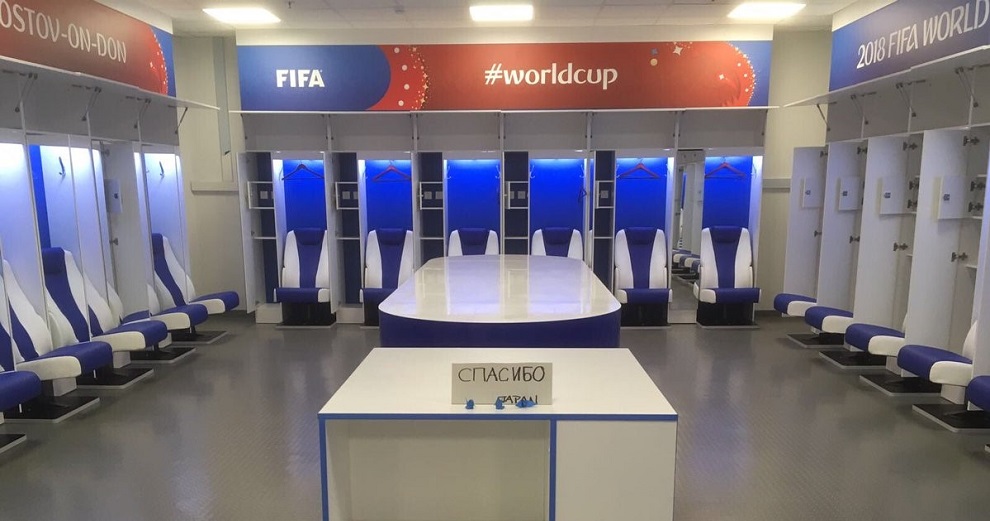 Now that’s what I call respect. Thank you Japan for giving us a reality check and some wonderful lessons. You were amazing (and you deserved much better). Photo credit: Priscilla Janssens, FIFA coordinator

Can you relate to these lessons? Do you have any further lessons for us? Please don’t hesitate and share them with us below.